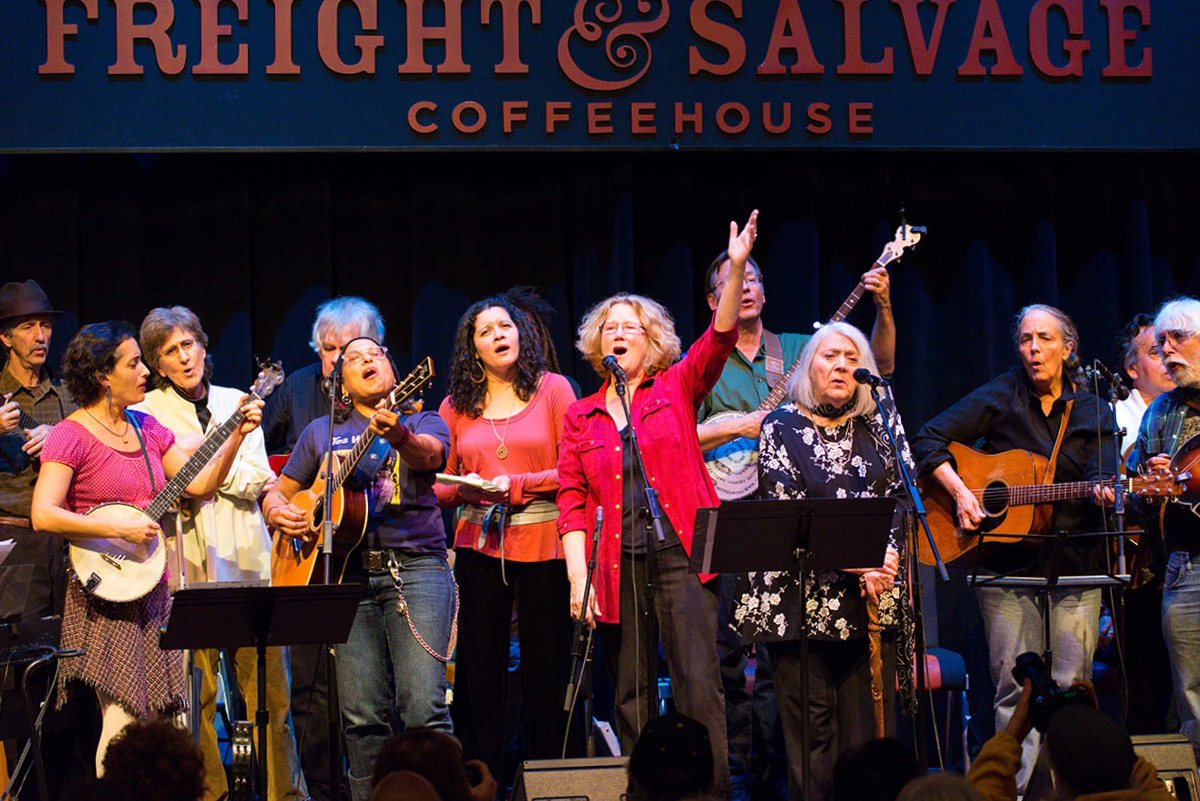 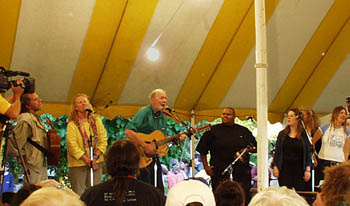 Where is the music?

Music is very personal so I never make recommendations. However, many people have expressed frustration asking, “Where is the next generation of political songwriters?” or “Why aren’t there any political singers?”. To find them one must be willing to look around, listen to people unfamiliar to the ear, take some risk.

In any given recording artists might present 15 political songs, or two. For example, in my own work, if someone heard that I was a political artist and bought Crushed: The Love Song Collection, they might feel misled. So, it is important not to make assumptions about artists. We are a wild bunch who, if we are any good at all, experiment and stretch and adventure away from any given stereotype. Yet the suggestions below are windows to what I hope will be some delightful discoveries for you. And this is just a drop in the bucket. Feel free to send in the name of your favorite social change artist. Criteria: They must have accessible recordings.  We will start an international list as well. I am not going to screen the suggestions, so readers, you are on your own.  I hope that people making submissions will do so with discretion.  Where is the music? It is everywhere.

A SALUTE TO THOSE WHO HAVE MOVED OUT OF SIGHT, BUT NOT OUT OF MIND

In December 2009, as part of her sabbatical year, Holly visited Argentina and Chile. She not only wanted to be a tourist, she also wanted to catch up with friends and visit some of the EPES Centers in Chile that her friend Karen Anderson co-founded.

As we all know, Chile was devastated by a magnitude 8.8 earthquake in the early morning of February 27, 2010. Holly was on the coast with friends and later that morning was able to reach Santiago.

In the spring of 2010, I was visiting friends in Chile when the country experienced a major earthquake. Fortunately, I was north of the area most hard hit.  However, the friends I was visiting work with a health care organization in Concepcíon, one of the most devastated areas. The people they serve, already poor and for the most part ignored by government assistance, now struggle to recover not only from the earthquake but from a change of government that took place immediately following the earthquake. And perhaps the most frightening is the coming of winter in Chile before houses have been rebuilt and supplies are still slim. I am moved by the level of community organizing that is going on despite the extraordinary hardship.

Sent to La Peña on the occasion of a fundraising event to benefit the earthquake survivors in Chile.

I wish I could join La Peña’s musical gathering on behalf of Chile but I am in Santiago.

I will try to share an update as things are changing by the hour. Communication has been difficult. There are close to 800 confirmed casualties and still thousands are missing. Many places, even in Santiago, are still without electricity, gas, water, food, shelter, cell phones or internet. Roads are damaged. The worst hit is Concepcíon and the nearby coastal towns and villages that not only experienced the earthquake but also the tsunami waves that followed.

However, little by little the country is catching up to the size of the disaster. Dozens of trucks are getting through with supplies, neighboring nations are donating field hospitals, doctors are arriving from Cuba, and satellite phone systems are being installed. I’m sure to those who are suffering, it does not feel like enough. But it is a beginning. We are heading into fall and soon it will be winter so the process must move quickly. The material damage is unimaginable, especially since so many of the towns were extremely poor to begin with. People’s homes and livelihoods have been destroyed and the number of people living in shelters is estimated at 2 million.

A week before the earthquake, I was actually in Concepcíon visiting a health organization called EPES (Educacíon Popular en Salud). I am friends with Karen Anderson, one of the co-founders, and I was being shown the new building as well as seeing some of the health education training they initiate. We were also taking a short vacation and traveled farther south.

Now a little over a week later, they are all in grave trouble. We finally heard that most are accounted for. An EPES team from Santiago which includes Karen just borrowed a pickup truck from Maryknoll and is heading south to take supplies and evaluate the situation in order to be of better use. We have heard from the main coordinator of the EPES health team, that the new building is still standing though everything was hurled to the floor. He has been able to dig down and reach a well behind the building and supply water to 150 people who live in the community surrounding the EPES compound.

The frontline is of course the survivors of the earthquake. Then there are of course the major disaster relief organizations which include the government, Red Cross etc. In addition to these two essential components are corporations and private companies that will move in to build housing. These homes will be welcome but it is important for people who live in the area to have some say about how this is done.

This is where the next level of support comes in. There are the organizations that already have long-standing relations with these communities and they will be working to find ways to offer the most essential and long-term support.

EPES is such an organization. It trains the poor and under-represented communities so they are empowered to have their own voice and manage their own lives. They will be putting together an assistance program not only to bring supplies but also to train and support organizers so they can begin to rebuild and have some control over how the rebuilding is done.

And finally, there are people like you and me in the international solidarity community. Our first responsibility is to get money to responsible organizations. I’m sure many of you have organizations you trust.

On The Personal Side

This is the end of summer vacation here in Chile. I was visiting my friend Judy at the beach in Quisco when the quake hit. Judy and I ran out of the house. Two elder people in the home chose to stay in bed for fear of falling. The shaking went on for a long time and then it was calm. There weren’t many people in the streets and since earthquakes are common in Chile – as they are in California, we went back to bed. Then the aftershocks began so we got up. As dawn came on I began to worry about the possibility of a tsunami. I kept an eye on the sea as we tried to figure out what to do. In hindsight, I am profoundly grateful to be alive. Not too far south of where we were, towns were being washed out to sea.

We had one small battery-operated radio that could only find a little station in Argentina and they had very little news. I began to understand how serious this might be in other places if all of the Santiago radio stations had stopped broadcasting. We had lost electricity, phones and internet. I learned later that my friends and family were seeing the size of the catastrophe on television in the states long before I was and they had no idea whether or not I was still in Concepcíon. Judy and I decided to try to return to Santiago. On the drive there, I got about 10 minutes of internet on my laptop and I was able to get a message through that Judy and I were fine.

This was a huge earthquake. I have never felt anything like it. It felt almost lateral. Eventually we began to get news. We heard that President Michelle Bachelet had immediately gone alone in the night to her office to try and find out who was being affected. No one could have imagined what she would find.

Yes, there is criticism of how long it took the government to act. I don’t know. I wasn’t there. I know that Chile is days away from transitioning from President Bachelet (who termed out) to President Elect Pinera, the conservative candidate who recently won the election.

Form where I stand, the one thing we can learn is to look at our own towns. Are we ready for disasters beyond our wildest imaginations? Do we have agreements with our supermarkets that in the event of a crisis they become distribution centers answerable to emergency response teams, to be reimbursed at cost another time? In Chile this would have helped to avert some of the violence. Parents were desperate to get milk, bread, water, diapers etc. for their children.

It is a sad, complex and terrible tragedy here. Santiago is relatively quiet and the metro is running so some people are starting to go back to work. The long lines at gas stations and grocery stores (we stood in line for 2 hours on Monday to pay for our supplies) have shortened. However, it is difficult to get an accurate picture of what is really happening.

People feel helpless; not sure what to do. It is not easy to get to Concepcíon to help and now the military are moving in to try and stop the violence. It gets more complex every day. People who lived under Pinochet do not like the idea of a “state of siege.” A general who used that terms was highly criticized by the administration, which tried to assure the people that “…this is not a war, this is a state of catastrophe. The soldiers are here to restore public order, different from being at war with your people.”

Soon I will return to the U.S. I can be of more use helping to fundraise than I can sitting here feeling frustrated. The airport is not open yet so we shall see.