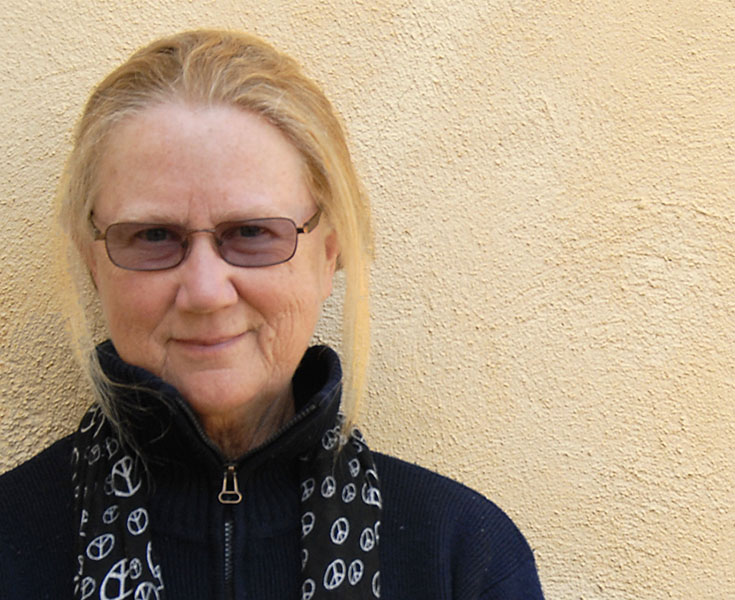 Holly Near has been singing for a more equitable world for well over 50 creative years. She is an insightful storyteller through her music, committed to keeping the work rooted in contemporary activism.

Respected around the world for her music and activism, Holly released her 31st album in 2018.

One of the most powerful, consistent, and outspoken singers of our time, her concerts elevate spirits and inspire activism. A skilled performer, Holly is an outspoken ambassador for peace who brings to the stage a unique integration of world consciousness, spiritual discovery, and theatricality.

Holly’s joy and passion continue to inspire people to join in her celebration of the human spirit. Equally compelling at her shows and through recordings, Holly’s music fully engages listeners in the world around them—speaking to anyone who believes in peace, justice, and feminism; a wonderful spectrum of humanity.

Born in Ukiah, CA in 1949, Holly began singing in high school, including work with a local folk group. She built on her performing career with acting parts on seminal ‘70s television shows like Mod Squad, Room 222, and The Partridge Family. In 1970 she was a cast member of the Broadway musical Hair. Following the Kent State University shootings in May of that same year the entire cast staged a silent vigil in protest. The song, “It Could’ve Been Me” (which was released on A Live Album, 1974) was Holly’s heartfelt response to the shootings. In 1971, she joined the “Free The Army” tour, an anti-Vietnam War road show of music, comedy, and plays organized by antiwar activist Fred Gardner and actors Jane Fonda and Donald Sutherland.

In 1972, Holly was one of the first women to create an independent record company, paving the way for women like Ani DiFranco and others. Her goal was to promote and produce music by politically conscious artists from around the world, a mission that Redwood Records fulfilled for nearly 20 years. Often cited as one of the founders of the Women’s Music movement, Holly not only led the way for outspoken women in the music world, but also worked for peace and multicultural consciousness. Throughout her long career Holly has worked with a wide array of musicians including Pete Seeger, Ronnie Gilbert, Arlo Guthrie, Mercedes Sosa, Bernice Johnson Reason, Bonnie Raitt, Jackson Browne, Joan Baez, Phil Ochs, Harry Belafonte, and many others.

Holly Near has been recognized many times for her work for social change, including honors from the ACLU, the National Lawyers Guild, the National Organization for Women, and the National Academy of Recording arts and Sciences. Holly was also named Ms. Magazine Woman of the Year and received the Legends of Women’s Music Award. During her travels in the Pacific with the Free The Army show, Holly became a globally conscious feminist, linking international feminism and anti-war activism. She was an active participant and coalition builder in what she refers to as the “heady days” of 1970s activism, when so many movements were gestating and jostling one another.

Another significant arena of Holly’s activism is the LGBTQ community. Her interest was both personal and political. She was one of the first celebrities to discuss her sexual orientation during a pioneering 1976 interview with People magazine. A staunch advocate for LGBTQ rights, Holly is comfortable with her own sexuality and has a clear understanding of the fluidity of sexual orientation.

Holly is also a teacher, presenting master classes in performance craft and songwriting to diverse audiences. Building on this role, her historic papers are housed at Radcliffe’s Schlesinger Library and are regarded as an informed look at the last 50 years of social change movements.

She has also become a spokesperson within the social change music movement. During her time on the road, luminaries in the folk world have noted how her presence sets the tone for each event she joins. As Holly has observed, “Music can influence choices for better or for worse. A lullaby can put a troubled child to sleep, but Muzak can put a whole nation to sleep. A marching band can send our children off to war. It can also have everyone laughing, dancing, and loving as the lead off to a gay pride parade”.

Holly finds herself in a role that her amazing journey has uniquely prepared her to fill as the significance of her work over time has crystallized her iconic status. At once flattered, amazed, and centered, she graciously assumes the honoring that comes with time, proud to represent—through her voice and her music—the movements that are so fundamental to her spirit.