went to Nicaragua with Kathy Goldman and members of the Jessie Cagan family to be present at the opening of a feeding center that Jessie has supported in her work with sister city Tipitapa. They were naming the center Centro Jessie.

What is a feeding center?

This is what I learned.

Children in Nicaragua get a school lunch. But the children not old enough for school do not have this meal. So a group of mothers got together and decided to feed the little ones. They would do it out of their homes and offer a meal to children in the neighborhood. The need was overwhelming. Soon, the women in 5 different houses were feeding 50 some children each.

Jessie Cagan, a long time activist in NYC, along with others established a sister city relationship with Tipitapa. Over the years, money has been raised and finally, these women with their husbands, daughters, sons, brothers and parents have built a feeding center. Although Jessie did not live to see the completion of the center, we went to celebrate the opening. I joined the Cagan family, Jessie’s best friend Kathy Goldman, and several solidarity activists to be part of the opening ceremony of this center in Tipitapa.

We learned that they are already working to build a second center. They have purchased the land and are raising money to break ground. We also learned that although the first center was completed, they did not have the money to buy a stove.

In addition to meeting with the mothers and the teachers of the child care center, I organized a field trip in to Managua to hear my old friend Luis Enrigue Mejia Godoy sing at a club he manages with his brother Carols. These two men have been central to development of “nueva cancion” or new song during the cultural blossoming that took place during the revolution in Nicaragua. It was lovely to hear his music and he did an honoring of me, Pete Seeger, Jackson Browne and other US artists. He said we, by example, had given the Nicaraguans the courage to develop music that was not only part of the Nicaragaugua tradition of poetry but stepped up to be part of the activism for peace and justice around the world. This was a very moving moment for in truth, the Nicaraguan artists were a great inspiration to me.

I also had a chance to visit with Katia Cardinal, one of Duo Guardabaranco. It was lovely to see her again and meet her children as well as some of the young artists coming up in Nicaragua. They all sang for me. Many years ago, Jackson Browne had produced a recording by Guarabaranco which the company I founded, Redwood Records, distributed in the eighties so Catia and I have history. We are all still grieving the passing of Salvador, Katia’s brother and the other part of Duo Guarabaranco. He passed away recently.

When I returned to the US, I mentioned Centro Jessie at a few concerts, in particular in NYC where a lot of Jessie’s friends were in the audience. We raised enough money to buy the stove! 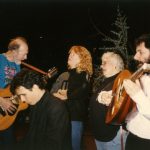 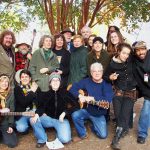 School of the Americas ProtestActivism